677 BC
Recent discussions over the correct dates and events in prophecy led me to do some research on the date of 677 BC.
This picture to the right, is an enlarged shot of the text of 2 Chron. 33:11 from the original 1769 King James Bible.
To the left of the text describing the capture and captivity of Manasseh, the date 677 is clearly stated in the margin. 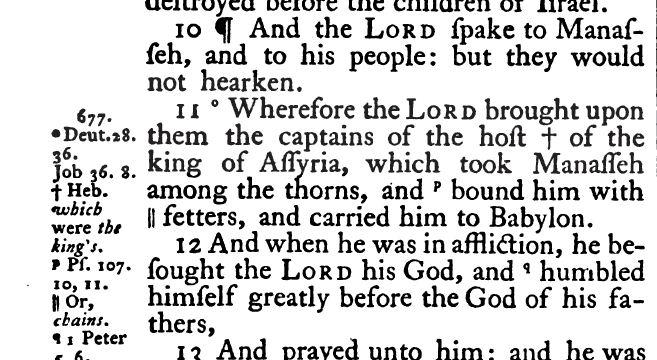 The following is a collection of some of the historical quotes that I have studied (and their subsequent dates), showing that the year 677 B.C. is when Manasseh, King of Judah, was taken into temporary captivity by the soldiers of Esarhaddon and taken to Babylon, which at that time was Esarhaddon’s temporary capital. This of course was the start date for the "Seven Times" prophecy, also called the "2520."

There are some other higher-critical sources that disagree with this date and Assyrian ruler for the captivity of Manasseh, but they contain conflicting reports and are based in doubt and inconsistency – while many firm statements, the most respected historians, and the weight of evidence all point to the year 677 B.C. as the correct date for Manasseh’s Babylonian captivity.

“677 BC … At the same time as Israel was conquered, the same Assyrian army attacked Judah. They captured Manasseh the king, as he was hiding in a thicket. They bound him with chains of brass and carried him captive into Babylon. 2Ch 33:11 Some think this calamity was foretold by the prophet Isaiah, when he says: ``within sixty five years Ephraim shall be so broken in pieces, that it shall be no more a people. And the head of Ephraim is Samaria, is the son of Remaliah: And if you will not believe, you shall not be established,'' Isa 7:8,9”

“677 BC …Eserhaddon then sent a detachment of his army against Judah, where his captains overcame King Manasseh in the field, who being forced after the defeat to flee away, the pursuers found him hid in a thicket of thorns, and sent him bound in chains to Babylon, 2 Chron. Xxxiii. 11. where their Lord Eserhaddon resided after the Campaign was over.”

“677 …Esarhaddon, after he had thus possessed himself of the land of Israel, sent some of his princes with part of his army into Judea, to reduce that country also under his subjection; who having vanquished Manasseh in battle, and taken him, hid in a thicket of thorns, brought him prisoner to Esarhaddon, who bound him in fetters, and carried him to Babylon…”

The Old & New Testament Connected in the History of the Jews, Prideaux, 1833 p.80

“Esarhaddon had three years before seized upon Babylon…in B.C. 678 he had invaded Palestine, and planted a colony of foreigners in Samaria, and in the following year his armies came upon Jerusalem, and took Manasseh, king of Judah, among the thorns, and bound him with fetters, and carried him to Babylon.”

“This prince [Esarhaddon], having possessed himself of the land of Israel, sent some of his generals with part of his army into Judea, to reduce that country likewise under his subjection. These generals defeated Manasseh, and having taken him prisoner, brought him to Esarhaddon, who put him in chains, and carried him with him to Babylon.”

“From a farther study of the Scriptures, I concluded that the seven times of Gentile supremacy must commence when the Jews ceased to be an independent nation at the captivity of Manasseh, which the best chronologers assigned to B. C. 677”

“The seven times, or 2520 years of the Jewish subversion, we have always dated from the captivity of Manasseh. This captivity is placed in B. C. 677, or the year 4037 of the Julian Period, in the 22nd year of Manasseh's reign, by Dr. Prideaux, Archbishop Usher, Jackson, Playfair, Blair and others;…”

“Babylon first became connected with the people of God by taking Manasseh, king of Judah, captive, B.C. 677. 2 Chron. xxxii. The date of Babylon, therefore, as represented by the head of gold, is B.C. 677.”

“Esarhaddon became king of Babylon as well as of Nineveh, and appears to have held his court sometimes at the Assyrian and sometimes at the Babylonian capital. He left numerous splendid buildings, but is best known to the Biblical student as the king who carried away Manasseh, the son of Hezekiah, into temporary captivity.”

“This king was Esarhaddon, who…despatched his generals, the chief of whom was Tartan, with a portion of his army for the reduction of Judah also. In a successful attack upon Jerusalem, they…took Manasseh among the thorns…bound him with fetters, and carried him to Babylon.”

Commentary Critical and Explanatory on the Whole Bible, Jamieson, Fausset, and Brown, 1871 p.284

“Manasseh, son and successor of Hezekiah, profaned the temple of the Lord by setting up altars to all the host of heaven, even in the courts of the Lord, 2Kin.21:4-7, for which God delivered him into the hands of the king of Babylon. He was loaded with chains and carried beyond the Euphrates, 2Chron.33:11, B.C. 677. But, humbling himself and repenting of his sins, he was sent back to his own dominions, and labored to repair the profanations he had committed upon the house of the Lord. Verses 14-16.”

The Sanctuary and the Twenty-three Hundred Days, Uriah Smith, 1877 p.157

“In prophecy it dates from B.C. 677, because then it became connected with the people of God, by the capture of Manasseh, king of Judah. 2Chron.33:11.”

“Esarhaddon…He appears by his monuments to have been one of the most powerful, if not the most powerful, of all the Assyrian monarchs. He is the only one of them whom we find to have actually reigned at Babylon, where he built himself a palace, bricks of which have been recently recovered bearing his name. His Babylonian reign lasted 13 years, from B.C. 680 to B.C. 667; and it was doubtless within this space of time that Manasseh king of Judah, having been seized by his captains at Jerusalem on a charge of rebellion, was brought before him at Babylon…”

“Thus Babylon, which had been razed to the ground by Sennacherib in B.C. 691, and the adjoining river choked with its ruins, was rebuilt, and Esar-haddon endeavoured to win over the Babylonians by residing in it during half the year. This affords an explanation of a fact mentioned in the Second Book of Chronicles (xxxiii. 11), which has long been a stumbling-block in the way of critics. It is there said that the king of Assyria, after crushing the revolt of Manasseh, carried him away captive to Babylon. The cause of this is now clear. As Esar-haddon spent part of his time at Babylon it merely depended on the season of the year to which of his two capitals, Nineveh or Babylon, a political prisoner should be brought.”

“Manasseh was captured and taken to Babylon, B. C. 677 (2 Chron. 33 : II), and the text says that this capture was effected by the captains of the king of Assyria.”

“Manasseh, king of Judah; carried captive to Babylon--- 677BC”

“Ever since 677 B.C. the Bible has said that "the captains of the host of the king of Assyria took Manasseh among the thorns, and bound him with fetters, and carried him to Babylon."

“In the fourth and fifth years, 678-676 B.C., an expedition was made into Palestine, Phenicia, and Cilicia. Manasseh was king of Judah at this time, and had been king for twenty-one years…And the Lord spake to Manasseh, and to his people: but they would not hearken. Wherefore the Lord brought upon them the captains of the host of the king of Assyria, which took Manasseh among the thorns, and bound him with fetters, and carried him to Babylon.”

“Faithfully the prophets continued their warnings and their exhortations; fearlessly they spoke to Manasseh and to his people; but the messages were scorned; backsliding Judah would not heed. As an earnest of what would befall the people should they continue impenitent, the Lord permitted their king to be captured by a band of Assyrian soldiers, who "bound him with fetters, and carried him to Babylon," their temporary capital. This affliction brought the king to his senses. "He besought the Lord his God, and humbled himself…But this repentance, remarkable though it was, came too late to save the kingdom from the corrupting influence of years of idolatrous practices. Many had stumbled and fallen, never again to rise.”

The next ruler (Esarhaddon’s son Ashurbanipal) reigned only from the Nineveh capital.

Esarhaddon was also the only Assyrian king to rule from Babylon and to be called the “king of Babylon” along with his title “king of Assyria”.

Stone cylinders of records from various rulers of Assyria and Babylon have been found throughout the years, which give us a good look into the history of that period of earth’s history. One of these Assyrian kings was Esarhaddon, who ruled Assyria and Babylonia from 681 – 669 BC.

Here are pictures of some of the stone cylinders discovered from Esarhaddon’s reign. 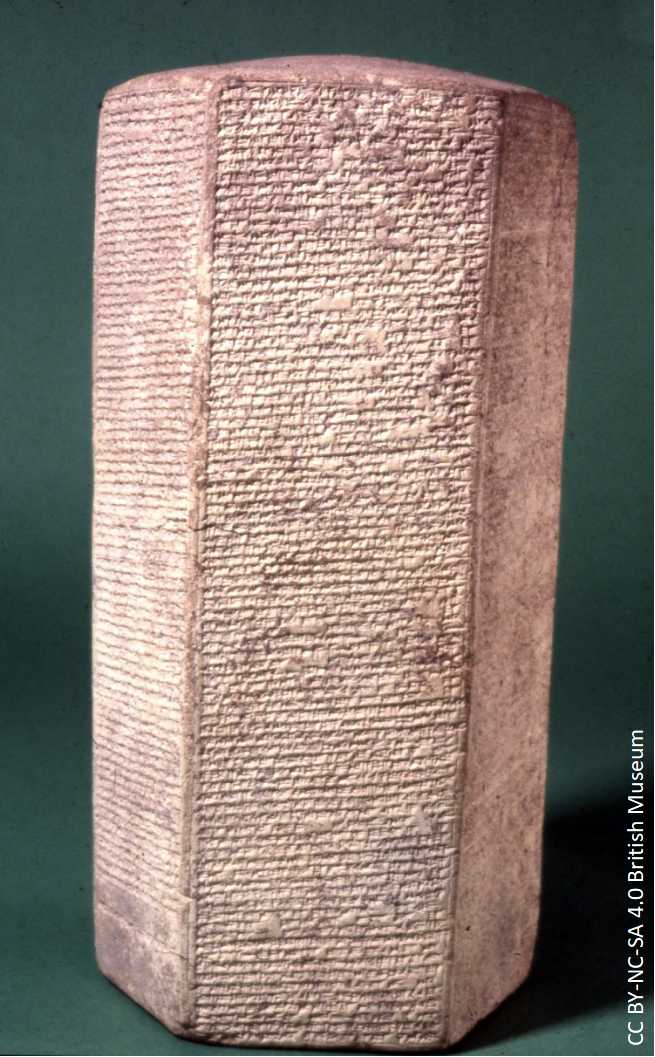 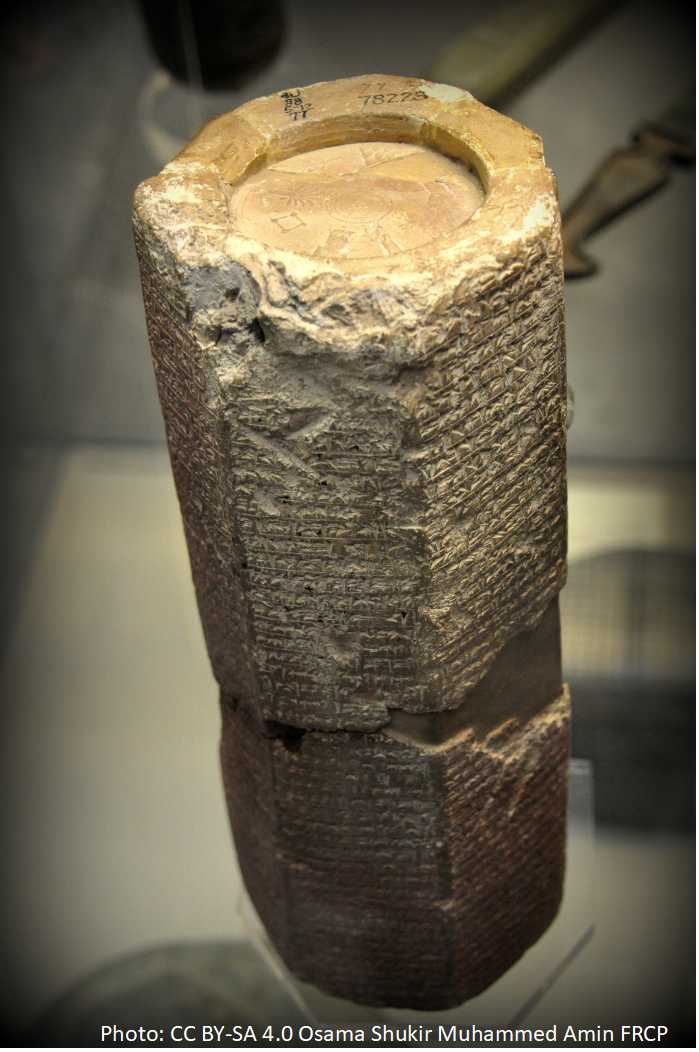 Sir Henry Rawlinson has documented the references on these cylinders and you can find some
of his work published under the name, “Cuneiform Inscriptions of Western Asia.”
Major-General Sir Henry Rawlinson served in the British army, and was one of the two individuals (the other being Edward Hincks) who successfully provided a working decipherment of Mesopotamian cuneiform.
Rawlinson is known the world over as the “Father of Assyriology” and "The Discoverer of the key to the Ancient Persian, Babylonian, and Assyrian Inscriptions in the Cuneiform character.” He is one of the top foremost experts in the history of Assyria and Babylonia.
Fragments of the Annals of Esarhaddon found on the lower half of a broken hexagonal cylinder, which is now in the British Museum, reveal some interesting information about Esarhaddon’s conquests.
This picture on the right, is a picture of the cuneiform text from “Cuneiform Inscriptions of Western Asia” (Vol. III, p. 16, col. v,),
where Esarhaddon himself specifies that Manasseh, King of Judah, was one of the kings that he himself overthrew and brought into submission.
In other words, Esarhaddon himself reveals that it was sometime during his own reign (681-669 BC)
when Manasseh was “overthrown” by him
(captured and taken to Babylon). 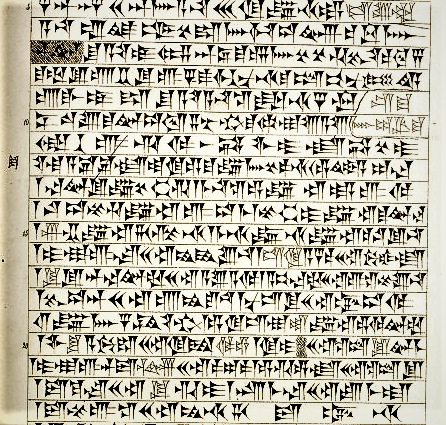 This reference is also mentioned in Professor George Barton’s book, “Archaeology and the Bible” (p.438).
George Barton was Professor of Semitic Languages at the University of Pennsylvania and Director of the American School of Oriental Research in Baghdad.

Quote from an inscription found from Esarhaddon himself:

Some of the well-known scholars and historians who taught 677 B.C. and/or the reign of Esarhaddon, for the captivity of Manasseh, either directly or indirectly.

Some Millerite/Adventist Pioneers who studied, believed, and taught 677 B.C. for the captivity of Manasseh.