These words, by a religious leader of the 18th century unfortunately remain true even today. World statistics point to the fact that over 40% of the earth’s population are unreached by the Gospel. We are told that the Gospel penetrating the whole world is a sign of the end, and as we see the disasters taking thousands of lives, should we not be in haste to bring the earth’s misery to a close by hastening Jesus Christ’s return.

Matthew 24:14  And this gospel of the kingdom shall be preached in all the world for a witness unto all nations; and then shall the end come.

Some people believe that since the gospel has reached every political country, our job is done, but this is like saying that since we planted a 100 member church in Phoenix, Arizona, the USA is reached. In Matthew 28:18-20 the Gospel Commission is given.

"And Jesus came and spake unto them, saying, All power is given unto me in heaven and in earth. Go ye therefore, and teach all nations, baptizing them in the name of the Father, and of the Son, and of the Holy Ghost: Teaching them to observe all things whatsoever I have commanded you: and, lo, I am with you alway, even unto the end of the world. Amen."

The Greek word for nations is “ethnos” meaning “a race (as of the same habit), that is, a tribe; specifically a foreign (non-Jewish) one (usually by implication pagan): - Gentile, heathen, nation, people.”

This tells us that before the end the gospel will be told to every tribe or “people group.”

Of the 16,801 people groups, according to the latest statistics over 6,000 are considered to be unreached with the gospel. According to one source, as of 2013, there are still over 2,900 unengaged (no missionary work being done)  and unreached people groups. This means that there are over 2 billion people who do not have the gospel, many of which may not even have opportunity to learn the truth.

Yet despite the condition of so much of the world failing to know the truth, the missionary spirit among professed Christians is lukewarm. Just as ancient Israel settled the land already conquered, so the church of today settles down to feed themselves instead of gaining new territory for Christ.

Every minute over 21 people die without hearing the gospel.

42.3% of the world population uses the Internet. www.internetworldstats.com.

Over 100 tribes are not even contacted by outsiders.

(To see the latest statistics on the unreached see Joshua Project)

To each is given their call to help the unreached. To those who may not have the talent of learning languages, or going to a foreign nation as a missionary, they can send help by prayer or sending felts, and supplies or Bibles overseas.

Bibles are needed that are translated into the languages of the people. However one must not forget that over 700 million adults cannot read or write and therefore missionaries are just as important. Even in places that have been reached by missionaries and have churches, many do not have successful evangelism programs to reach children. Churches, even in territories that have been reached, struggle with the fact they have no children’s classes and equipment to teach the young.

The question some may ask is;

“Will there be people saved from every people group and language?”

The Bible answers this in Revelation 7:9, 10

After this I beheld, and, lo, a great multitude, which no man could number, of all nations, and kindreds, and people, and tongues, stood before the throne, and before the Lamb, clothed with white robes, and palms in their hands; And cried with a loud voice, saying, Salvation to our God which sitteth upon the throne, and unto the Lamb.

There will be people saved from every nation, kindred, people, and language.

This map from Joshua Project (Evangelical) gives an idea of how much of the world was still "Unreached" as of 2011.

Even less has been reached with the 3 Angels' Messages! 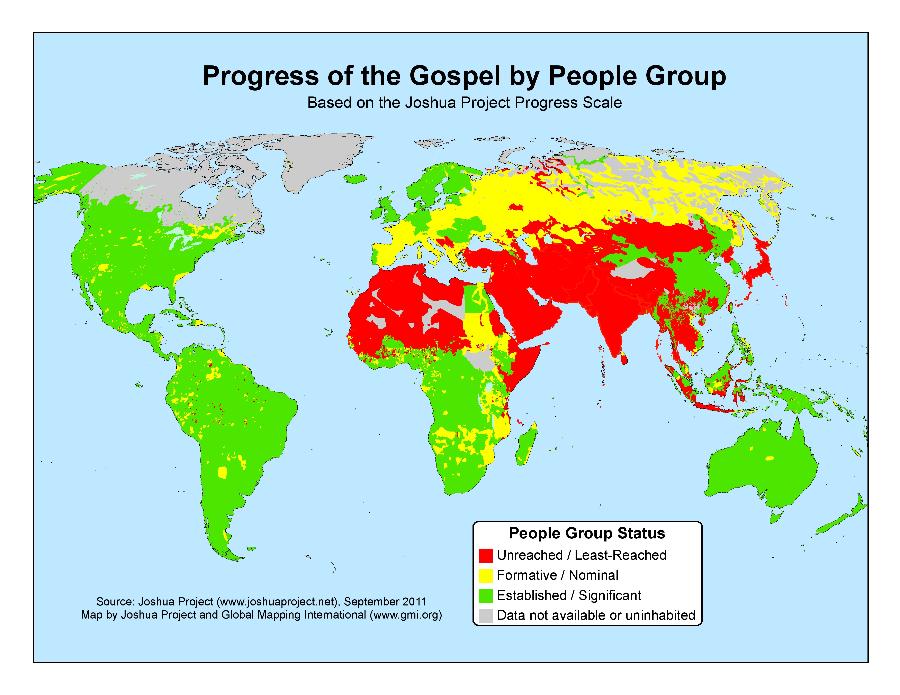 The world will not be reached unless there is more self-denial and sacrifice on the part of God people. But we should be willing to give everything to get the message to the world.

Jesus Christ gave up the comforts and the safety of heaven for our salvation. To love others like Christ did, we should be willing to give up the earthly comforts we enjoy to save souls.

Mark 16:15  And he said unto them, Go ye into all the world, and preach the gospel to every creature.

If the gospel is really to be preached to every person before Christ comes to end this world of misery, than who is to blame for the disasters and crimes taking place in the world today? Could God's professed people, who are not fulfilling His Commission, be in part responsible for the problems in the world?

Are we withholding the only hope there is for mankind from much of mankind?

"To know the will of God, we need an open Bible and an open map."—William Carey, pioneer missionary to India

"You can give without loving. But you cannot love without giving." — Amy Carmichael, missionary to India

Ask yourself the question: If Christ is waiting for me to help spread the Gospel, how long will He have to wait?

"What will be written about you in the history of God's people? You may be remembered as a faithful, loving disciple who took the Good News of a crucified, resurrected, ascended, and soon-coming Jesus to an unreached people group. Or, you may be forgotten as someone who spent more time updating your facebook page and surfing the web than walking with Jesus."--John Baxter

"Scarcely a thousandth part of the work is being done that ought to be done in missionary fields."—E. G. White

"Any church that is not seriously involved in helping fulfill the Great Commission has forfeited its biblical right to exist." — Oswald J. Smith 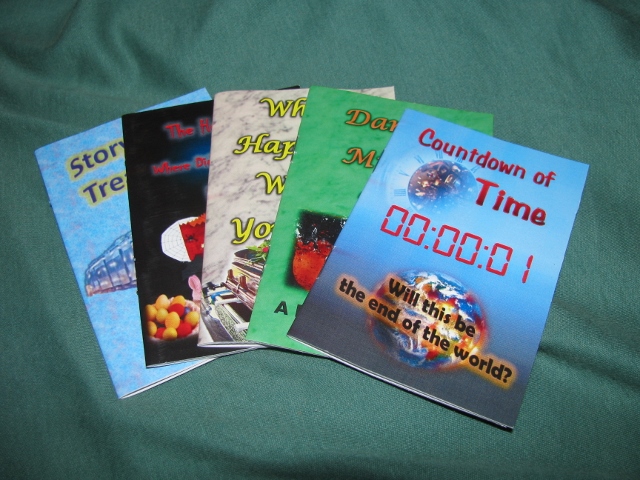