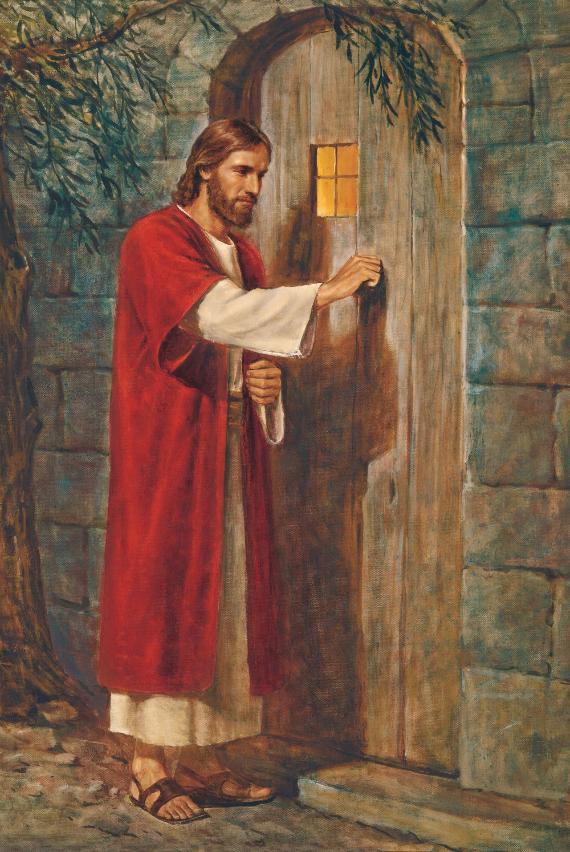 If Jesus Came to Your House

If he came unexpectedly, I wonder what you'd do.

Oh, I know you'd give your nicest room to such and honored guest,

And all the food you'd serve Him would be the very best,

That serving Him in your home is a joy beyond compare.

But--when you saw Him coming, would you meet Him at the door

With arms outstretched in welcome to your heavenly visitor?

Or would you have to change your clothes before you let Him in,

Or hide some magazines and put the Bible where they'd  been?

Would you turn off the radio and hope he hadn't heard,

And wish you hadn't uttered the last, loud and hasty word?

Would you hide your worldly books and put some hymnbooks out?

Could you let Jesus walk right in, or would you rush about?

And I wonder if the Saviour spent a day or two with you,

Would you go right on doing the things you always do?

Would you keep right on saying the things you always say?

Would life for you continue as it does from day to day?

Would your family conversation keep up its usual pace,

And would you find it hard each meal to say a table grace?

And let Him know the things on which your mind and spirit feed?

Would you take Jesus with you every where you'd planned to go,

Or would you maybe change your plans for just a day or so?

Would you be glad to have Him meet your very closest friends,

Or would you hope they'd stay away until His visit ends?

Would you be glad to have Him stay forever on and on,

Or would you sigh in great relief when He at last was gone?

If Jesus Christ in person came to spend some time with you.

Just Who is Controlling You?

An interesting story is told of Giani, a young woman possesed with 37 demons.  It happened in Caxias do Sul, Brazil.  It took 88 days to liberate this victim.  A paragraph of the report reads as follows:

Many times during the 88 days before Giani was freed from the last demon, one of them would taunt and ridicule one person present or another, saying that they belonged to him.  The devil would mention sins such as novel reading, listening to popular music, or wearing makeup, and would say that because the person did not give these up they belonged to him.  Such encounters caused many of the church members to renew their consecration to God and give up the sins the devil mentioned.  (Review, July 4, 1974,pg. 20, Emphasis added)

The Fence or the Ambulance

"Twas a dangerous cliff, as they freely confessed,

Though the walk near the cliff was so pleasant:

But over its terrible edge there had slipped

A duke and many a peasant;

So the people said something would have to be done,

But their projects did not at all tally;

Some said, "Put a fence round the edge of the cliff,"

Some, "An ambulance down in the valley."

But the cry for the ambulance carried the day,

For it spread to the neighboring city;

A fence may be useful or not, it is true,

But each heart became brimful of pity

For those who had slipped o'er the dangerous cliff,

And the dwellers in highway and alley

Gave pounds or gave pence, not to put up a fence,

But an ambulace down in the valley.

"For the cliff is all right if your careful," they said;

"And if folks ever slip or are dropping,

It isn't the slipping that hurts them so much

As the shock down below--when their stopping."

So day after day when the mishaps occured,

Quick forth would the rescuers sally

To pick up the vicims who fell off the cliff

With their ambulance down in the valley.

Then an old man remarked: "It's a marvel to me

That the people give far more attention

To repairing results than to stopping the cause,

When they much better aim at prevention.

Let us stop at its source all this mischief," cried he,

If the cliff we will fence, we might almost dispense

With the ambulance down in the valley."

"Oh, he's a fanatic," the others rejoined;

"Dispense with the ambulance? Never!

He'd dispense with all charities too, if he could:

No we'll support them forever.

Aren't we picking them up just as fast as they fall?

And shall this man dictate to us? Shall he?

Why should people of sense stop to put up a fence,

While their ambulance works in the valley?"

This story is so old has been beautifully told

How our people with best of intentions,

Have wasted their years and lavished their tears

On treatment, with naught for prevention.

But a sensible few, who are practical too,

Will not bear with such nonsense much longer;

They believe that prevention is better than cure,

And their party will soon become stronger.

Encourage them then, with your purse, voice, and pen,

(And while other philanthropists dally)

They will scorn all pretense, and put up a stout fence

On the cliff the hangs over the valley.

Better guide well the young than reclaim them when old,

For the voice of true wisdom is calling,

" To rescue the fallen is good, but 'tis best

To prevent other people from falling."

Better close up the source of temptation and crime

Than deliver from dungeon or galley;

Better put a strong fence round the top of the cliff

Than an ambulance down in the valley.

Stranger In our Home

A few months before I was born, back in the 1950's Dad met a stranger who was new to our small town.  Dad was fascinated with this enchanting newcomer and soon invited him to live with our family.

The stranger was quickly accepted and was around to welcome me into the world a few months later.  Growing up, I never questioned his place in our family.

Mom taught me to love the Bible, and Dad taught me to obey it, but the stranger was our storyteller.  He could weave the most fascinating tales.  Adventures, mysteries and comedies were daily conversations.  He could hold our whole family spellbound for hours each evening.  He was like a friend to the whole family.  He took Dad, my brother and me to see our first football game.  He was always encouraging us to go to the movies, and he even made arrangements to introduce us to several celebrities.  The stranger was an incessant talker. Dad didn't seem to mind, but sometimes, while the rest of us were enthralled with one of his stories of faraway places, Mom would quietly get up, go to her room, read the Bible and pray.  I wonder now if she ever prayed that the stranger would leave.

You see, Dad ruled our household with certain moral convictions, but this stranger  never  felt an obligation to honor them.

Profanity, for example, was not allowed-not from us, from our friends or from the adults.  Yet our longtime visitor used occasional four-letter words that burned my ears and made Dad squirm.  To my knowledge, the stranger was never confronted.

My Dad didn't permit  alcohol in his home-not even for cooking--but the stranger felt like we needed exposure and enlightened us to other ways of life.  He offered us alcoholic beverages. He made cigarettes look tasty, cigars manly and pipes distinguished.  He talked freely about sex.  His comments were sometimes blatant, sometimes suggestive and generally embarrassing.  He spoke of homosexuality and  other sexual deviancies as though they were totally acceptable.

As I look back, I believe it was only by the grace of God that the stranger did not influence us more.  Time after time, he opposed the values of our parents, yet he was seldom reprimanded and never asked to leave.

Nearly fifty years have passed since the stranger moved in with us, but if I were to walk into my parents home today, I would still see him sitting there, waiting for someone to listen to his stories.

We just call him by his initials--TV.

Ever notice all those in favor of abortion have already been born? 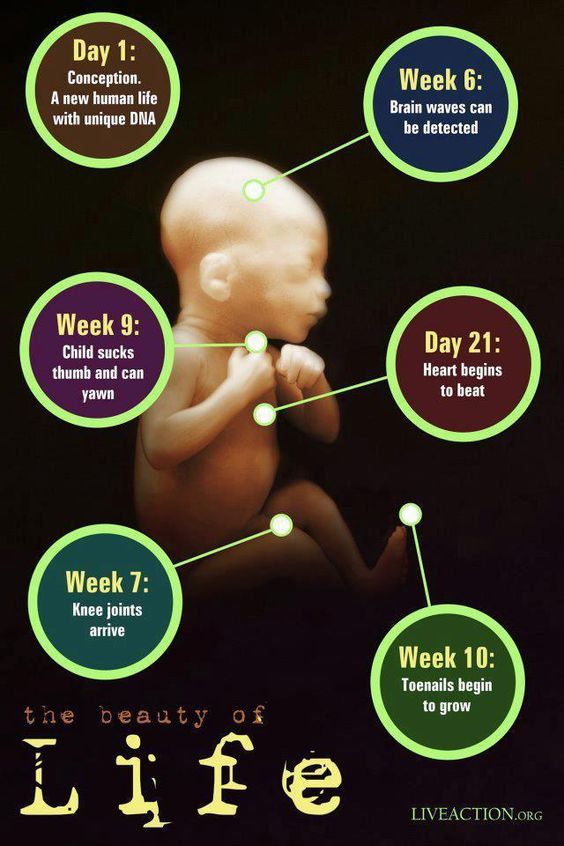 Psalm 127:3
Lo, children are an heritage of the LORD: and the fruit of the womb is his reward.
Isaiah 49:15   Can a woman forget her sucking child, that she should not have compassion on the son of her womb? yea, they may forget, yet will I not forget thee. 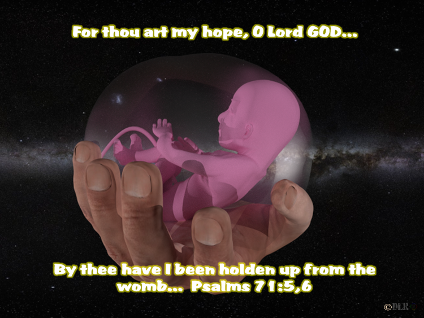