In January (2014) the pope sent a message to Protestant leaders via. Anglican Episcopal Bishop Tony Palmer who spoke before a group of cheering followers at the Kenneth Copeland Ministries. Among other things that Palmer said in calling Protestants back to Rome and fellowship with Roman Catholicism, he said: "Brothers and sisters, Luther’s protest is over. Is yours?"

In light of Palmer's comments I think a good question might than be--"Why then did God put so many words in the Bible?"  2 Timothy 3:16,17  All scripture is given by inspiration of God, and is profitable for doctrine, for reproof, for correction, for instruction in righteousness:   That the man of God may be perfect, throughly furnished unto all good works.

Here  is the transcript of that message:

“Two rules: Love God above all, and love the other (neighbor), because he is your brother and sister. With these two rules we can go ahead. I am here with my brother, my bishop brother, Tony Palmer. We’ve been friends for years.

He told me about your conference, about your meeting. And it’s my pleasure to greet you. A greeting both joyful and nostalgic (yearning). Joyful because it gives me joy that you have come together to worship Jesus Christ the only Lord. And to pray to the Father and to receive the Holy Spirit. This brings me joy because we can see that God is working all over the world. Nostalgic (yearning) because but…it happens, as within our suburbs. In the suburbs there are families that love each other and families that don’t love each other. Families that come together and families who separate themselves. We are kind of…permit me to say, separated.

Separated because, it’s sin that has separated us, all our sins. The misunderstandings throughout history. It has been a long road of sins that we all shared in. Who is to blame? We all share the blame. We have all sinned. There is only one blameless, the Lord. I am nostalgic (yearning), that this separation comes to an end and gives us communion. I am nostalgic (yearning), of that embrace that the Holy Scripture speaks of when Joseph’s brothers began to starve from hunger, they went to Egypt, to buy, so that they could eat.

They went to buy. They had money. But they couldn’t eat the money. But there they found something more than food, they found their brother. All of us have currency. The currency of our culture. The currency of our history. We have lot of cultural riches, and religious riches. And we have diverse traditions. But we have to encounter one another as brothers. We must cry together like Joseph did. These tears will unite us. The tears of love.

I am speaking to you as a brother. I speak to you in a simple way. With joy and nostalgia (yearning). Let us allow our nostalgia (yearning) to grow, because this will propel us to find each other, to embrace one another. And together to worship Jesus Christ as the only Lord of History.

I thank you profoundly for listening to me. I thank you profoundly for allowing me to speak the language of the heart. And I also ask you a favor. Please pray for me, because I need your prayers. And I will pray for you, I will do it, but I need your prayers. And let us pray to the Lord that He unites us all. Come on, we are brothers. Let’s give each other a spiritual hug and let God complete the work that he has begun. And this is a miracle; the miracle of unity has begun.

A famous Italian author named Manzoni, once wrote in his novel, of a simple man amongst the people, who once said this, “I’ve never seen God begin a miracle without Him finishing it well.” He will complete this miracle of unity. I ask you to bless me, and I bless you. From brother to brother, I embrace you. Thank you.”

This is just one more sign of the times.

Notice his continual use of the word "nostalgia"!

Webster's dictionary says "Nostalgia" = "pleasure and sadness that is caused by remembering something from the past and wishing that you could experience it again."

Could the pope be looking back at and wishing for the restoration of the power and control that the Papacy held over the earth during the Dark Ages? This message sounds very much like fulfilment of Bible prophecy. It should make Protestants alarmed at the concessions made, not happy!  The wicked one will come with lying miracles. Could this be a miracle of unity not founded in the doctrinal truths of the word of God?

2 Thessalonians 2:8-10  And then shall that Wicked be revealed, whom the Lord shall consume with the spirit of his mouth, and shall destroy with the brightness of his coming:  Even him, whose coming is after the working of Satan with all power and signs and lying wonders,  And with all deceivableness of unrighteousness in them that perish; because they received not the love of the truth, that they might be saved.

Look at what was written over 120 years ago:

" The Romish Church now presents a fair front to the world, covering with apologies her record of horrible cruelties. She has clothed herself in Christ-like garments; but she is unchanged. Every principle of popery that existed in past ages exists today. The doctrines devised in the darkest ages are still held. Let none deceive themselves. The popery that Protestants are now so ready to honor is the same that ruled the world in the days of the Reformation, when men of God stood up, at the peril of their lives, to expose her iniquity. She possesses the same pride and arrogant assumption that lorded it over kings and princes, and claimed the prerogatives of God. Her spirit is no less cruel and despotic now than when she crushed out human liberty, and slew the saints of the Most High. Popery is just what prophecy declared that she would be, the apostasy of the latter times. [2 Thessalonians 2:3, 4.] It is a part of her policy to assume the character which will best accomplish her purpose; but beneath the variable appearance of the chameleon, she conceals the invariable venom of the serpent. “We are not bound to keep faith and promises to heretics,” She declares. Shall this power, whose record for a thousand years is written in the blood of the saints, be now acknowledged as a part of the church of Christ? It is not without reason that the claim has been put forth in Protestant countries, that Catholicism differs less widely from Protestantism than in former times. There has been a change; but the change is not in the papacy. Catholicism indeed resembles much of the Protestantism that now exists, because Protestantism has so greatly degenerated since the days of the reformers."  GC88 570-571

"And let it be remembered, it is the boast of Rome that she never changes. The principles of Gregory VII. and Innocent III. are still the principles of the Romish Church. And had she but the power, she would put them in practice with as much vigor now as in past centuries. Let the principle once be established in the United States, that the church may employ or control the power of the State; that religious observances may be enforced by secular laws; in short, that the authority of church and State is to dominate the conscience, and the triumph of Rome in this country is assured. God's Word has given warning of the impending danger; let this be unheeded, and the Protestant world will learn what the purposes of Rome really are, only when it is too late to escape the snare. She is silently growing into power. Her doctrines are exerting their influence in legislative halls, in the churches, and in the hearts of men. She is piling up her lofty and massive structures, in the secret recesses of which her former persecutions will be repeated. Stealthily and unsuspectedly she is strengthening her forces to further her own ends when the time shall come for her to strike. All that she desires is vantage-ground, and this is already being given her. We shall soon see and shall feel what the purpose of the Roman element is. Whoever shall believe and obey the Word of God will thereby incur reproach and persecution."  GC88 581

"The Protestants of the United States will be foremost in stretching their hands across the gulf to grasp the hand of Spiritualism; they will reach over the abyss to clasp hands with the Roman power; and under the influence of this threefold union, this country will follow in the steps of Rome in trampling on the rights of conscience." GC88 588 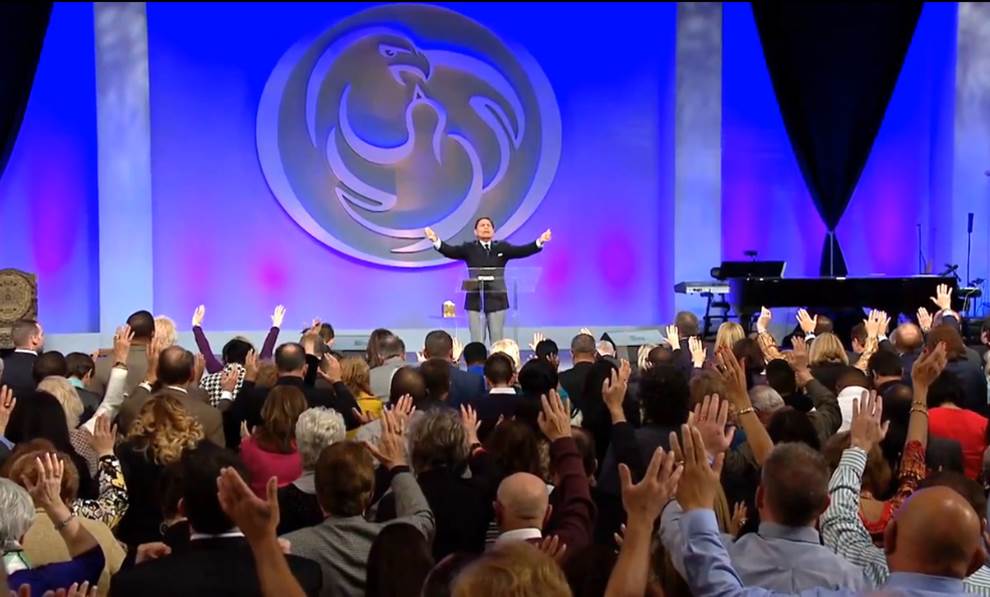