The Godhead in the Sanctuary

"ART. II. I believe in one living and true God, and that there are three persons in the Godhead, - as there is in man, the body, soul and spirit. And if anyone will tell me how these exist, I will tell him how the three persons of the Triune God are connected." William Miller  Sept. 5, 1822

And the LORD God formed man of the dust of the ground (body), and breathed into his nostrils the breath of life (spirit); and man became a living soul. Genesis 2:7

What? know ye not that your body is the temple of the Holy Ghost which is in you, which ye have of God, and ye are not your own? 1Cor. 6:19 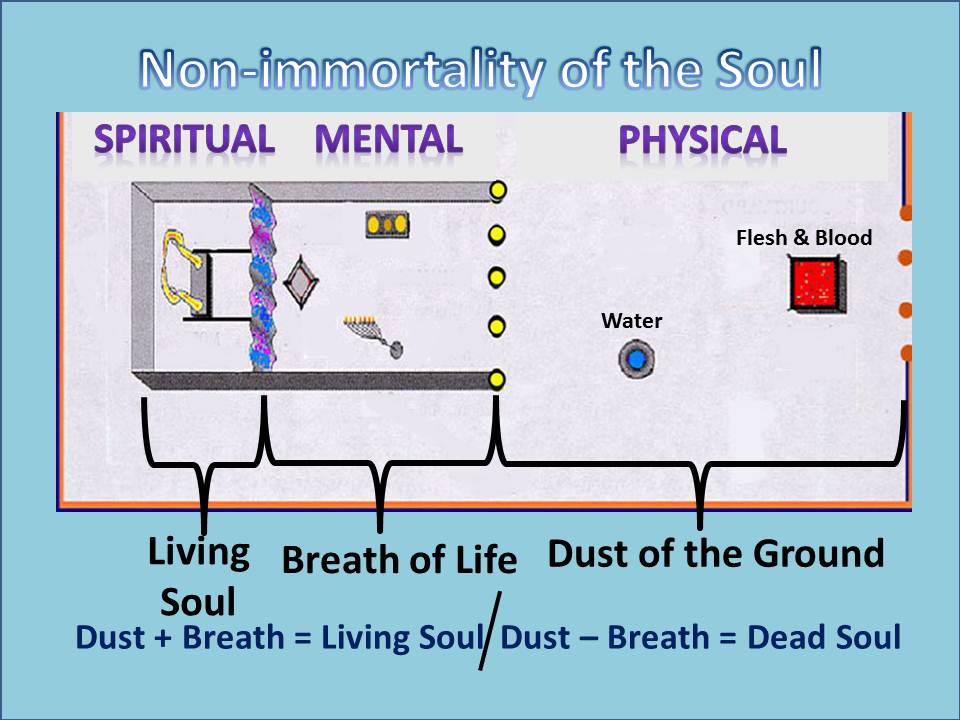 Man was created as “Body + Breath = Soul”. In the courtyard you have the “Dust” (body).

“The priests were not allowed to enter the sanctuary with their shoes on their feet; for the particles of dust cleaving to them would desecrate the holy place. They were to leave their shoes in the court before entering the sanctuary,…” Gospel Workers p.173

In the Holy Place you have the “Breath” (spirit).

“The prayers of the saints, mingled with the merit and perfection of Christ, will ascend up as fragrant incense before the Father.” RH 3-24-1896

“They united in silent prayer, with their faces toward the holy place. Thus their petitions ascended with the cloud of incense, while faith laid hold upon the merits of the promised Saviour prefigured by the atoning sacrifice.” PP p.353

In the Most Holy you have the “Soul” (life).

“Probation is granted to all, that all may form characters for eternal life. An opportunity will be given to all to decide for life or death…All will be tested before Jesus leaves His position in the most holy place.” 2T p.691

Man was originally created to live forever, just like God, in whose image he was created in. Disobedience to God is sin, and sin brings death! Sin and death are the reversals of God’s original creation plan. “Body – Breath = Dead (No) Soul”

Whosoever committeth sin transgresseth also the law: for sin is the transgression of the law. 1John 3:4

"The wages of sin is death; but the gift of God is eternal life through Jesus Christ our Lord." [Romans 6:23.] While life is the inheritance of the righteous, death is the portion of the wicked. The penalty threatened is not merely temporal death, for all must suffer this. It is the second death, the opposite of everlasting life.” 4Spirit of Prophecy p. 364

Therefore doth my Father love me, because I lay down my life, that I might take it again.

Just as man, when he dies as a result of sin, has a body that loses it’s breath (one of his 3 components has to die); so, in order to make atonement for sin, One of the Godhead (which man is created in the image of) had to die.

For the grave cannot praise thee, death can not celebrate thee: they that go down into the pit cannot hope for thy truth. The living, the living, he shall praise thee, as I do this day: the father to the children shall make known thy truth. Isaiah 38:18-19

And when Jesus had cried with a loud voice, he said, Father, into thy hands I commend my spirit: and having said thus, he gave up the ghost. Luke 23:46 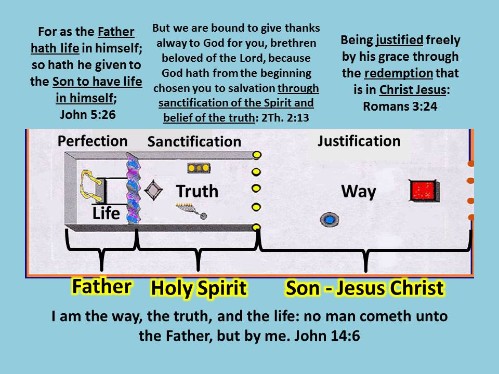 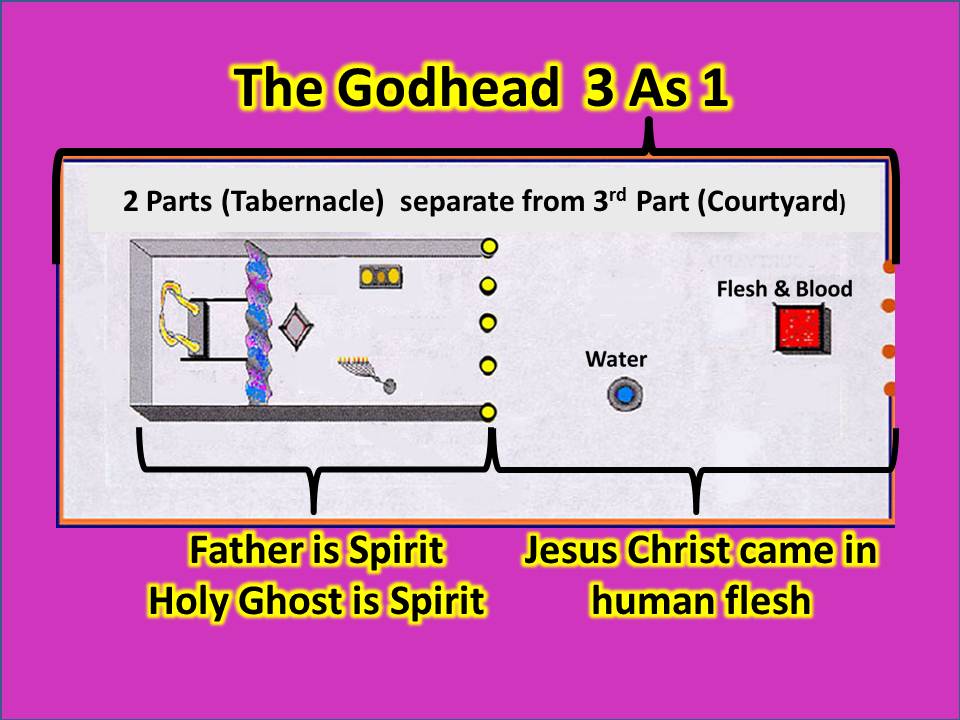 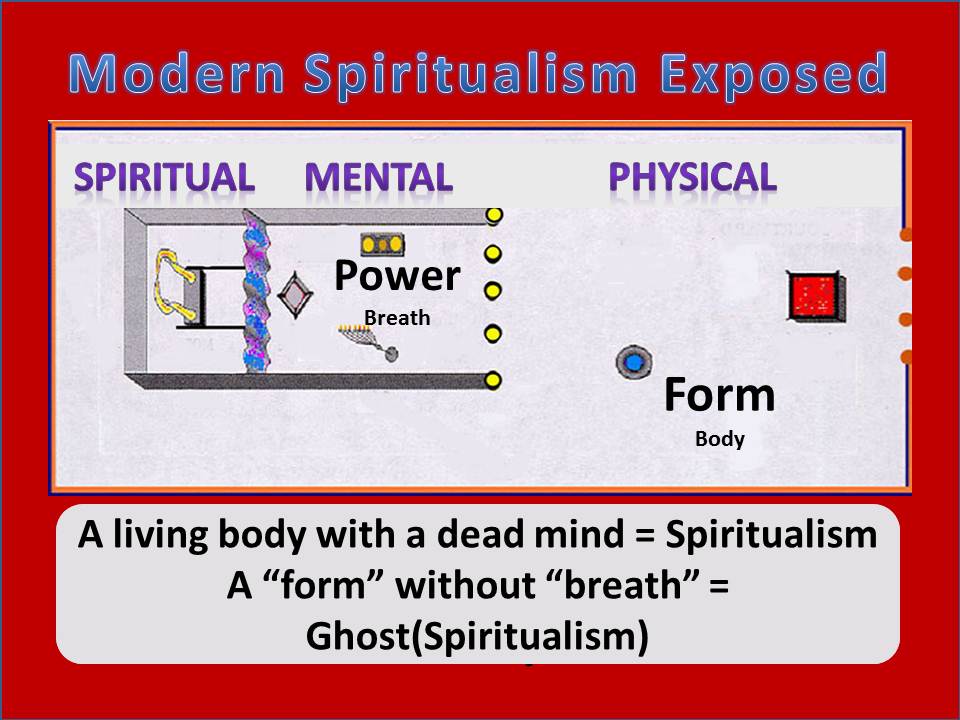 Spiritualism takes away the connecting component between the “courtyard” and the “Most Holy Place”. Therefore, anything that takes away this connector in any way, shape, or form, is a type of Spiritualism! (Body without Breath, Form without Power, Justification without Sanctification, Christ ministry going from earth directly to Most Holy (New Theology), “Way” without “Truth”, Love without Law, etc.

This doctrine, that is spreading like wildfire, teaches that when the Bible refers to the Holy Spirit, it is not referring to a separate person of the Godhead but to a non-personal force that is actually part of the Father. Individuals promoting this doctrine have numerous texts and Spirit of Prophecy quotes that they use to try to substantiate their theory, but it is scripture misapplied and misquoted!

I was given an 88 page book that contained Bible texts and Spirit of Prophecy quotes that were aimed at destroying the doctrine that the Holy Spirit is the third person of the Godhead. However, as I read through the material, I noticed that all of the quotes were taken out of context, and that some were twisted around to sound like they were saying one thing – when in reality, when I looked them up in context, they were saying the exact opposite. 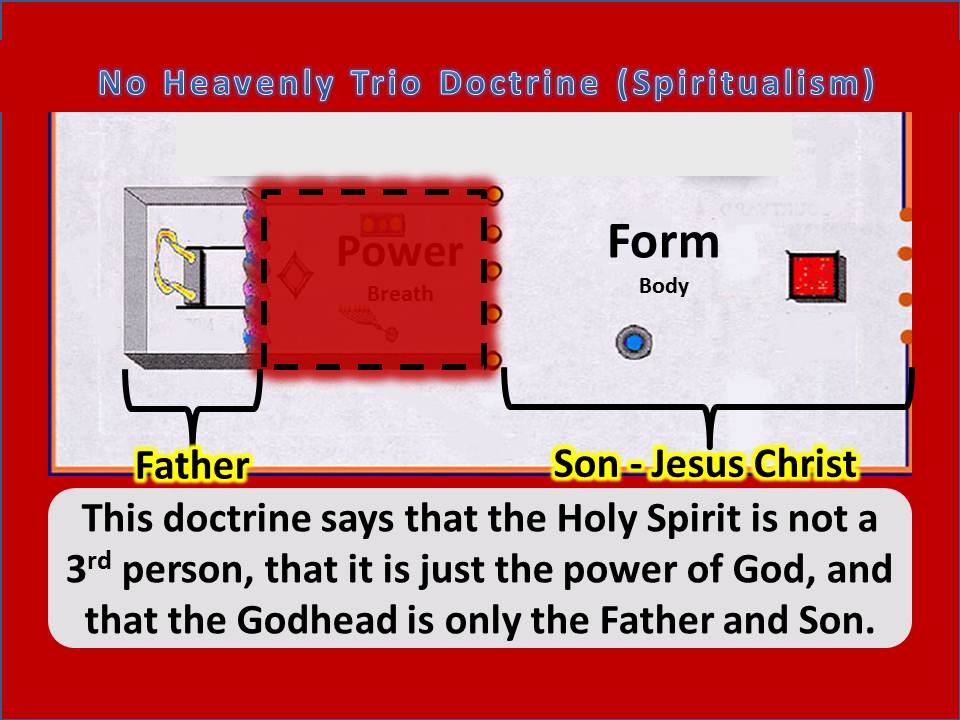 Why would Satan come up with a doctrine that attacks the person of the Holy Spirit?  Friends, if you attack the breath, the soul dies, and the body is rotting in the ground. If you attack the person of the Holy Spirit, the Father is destroyed, and the Son is dead rotting in the ground! By attacking the Holy Spirit – you have, in effect, destroyed the entire Godhead! This doctrine is total spiritualism! By making the Spirit just an impersonal force of the Father, you, by default, have just stepped onto the forbidden ground of “Pantheism”!

The Alpha of apostasy (John Kellogg’s book “The Living Temple”) taught that God was an impersonal force, an “essence” that pervaded everything in the universe. The Spirit of Prophecy says that the Omega would come and that it would be “of a most startling nature.” This current movement against the Holy Spirit is part of the “Omega!”

“To reject the Holy Spirit, through whose power we conquer the forces of evil, is the sin that surpasses all others; for it cuts us off from the source of our power,--from Christ and communion with him.” RH 8-25-1896

This anti-3rd Person doctrine is a form of hypnotism that is very subtle.

“Just as long as men consent to listen to these sophistries, a subtle influence will weave the fine threads of these seductive theories into their minds, and men who should turn away from the first sound of such teaching will learn to love it. As loyal subjects we must refuse even to listen to these sophistries. Their influence is something like a deadly viper, poisoning the minds of all who listen. It is a branch of hypnotism, deadening the sensibilities of the soul.”  10MR 163

“As Eve listened [to the serpent], the warnings that God had given faded from her mind.” Signs of the Times May 29, 1901

“There are three living persons of the heavenly trio; in the name of these three great powers--the Father, the Son, and the Holy Spirit--those who receive Christ by living faith are baptized, and these powers will co-operate with the obedient subjects of heaven in their efforts to live the new life in Christ.”-- Evangelism, p. 615

“Man has fallen, and his is a work of a lifetime, be it longer or shorter, to recover from his fall, and regain, through Christ, the image of the divine, which he has lost by sin and continued transgression. God requires a thorough transformation of soul, body, and spirit, in order to regain the estate lost through Adam. The Lord mercifully sends rays of light to show man his true condition. If he will not walk in the light, he manifests a pleasure in darkness. He will not come to the light lest his deeds should be reproved.” 2 T p.448

Hearken unto me, O Jacob and Israel, my called; I am he; I am the first, I also am the last… Come ye near unto me, hear ye this; I have not spoken in secret from the beginning; from the time that it was, there am I: and now the Lord GOD, and his Spirit, hath sent me. Thus saith the LORD, thy Redeemer, the Holy One of Israel…  Isaiah 48:12-17

Those promoting this anti-Holy Spirit doctrine like to claim that the Trinity doctrine is a pagan doctrine that has come in from the Roman Catholic church. Yes, there are false trinities in several religions; but that does not justify throwing out the truth because of error. The word “trinity” according to Webster’s dictionary simply means “threefold, or having three members.” The Catholic version of “Trinity” is talking about a “One person with three faces” type of idea, but the true Godhead is three separate individuals that are united together in purpose. (Just like when you get married – there are two individuals, but the Bible says that they are “one flesh.”) Satan does not have original ideas – he counterfeits truth. Every road has 2 ditches, but you do not leave the road because of the 2 ditches. In order for there to be a counterfeit “trinity”- by name – there has to be a true “Trinity” or “Godhead”! There can be no counterfeit of something if the something does not exist. You can not have a counterfeit $5 bill if there is no genuine $5 bill. 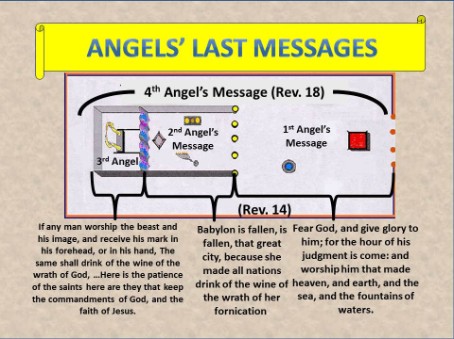 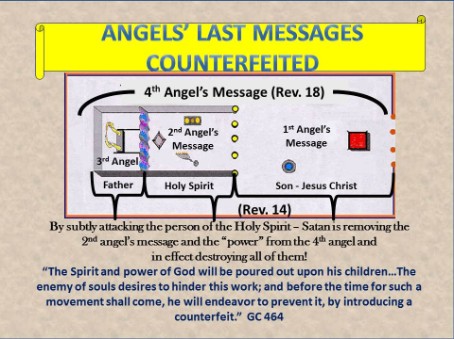